Michael Card: The veteran US songsmith

He wrote "El Shaddai" and he's much loved for his biblical concept albums. But there are many other sides to the veteran singer/songwriter MICHAEL CARD. He spoke to Steve Givens. 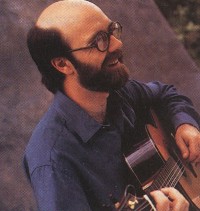 Contemporary Christian Music's resident scripture scholar has been "listening to his life." What he has heard forms the basis of his new album 'Poiema', which takes a much different turn from Card's previous offerings and tells us more about the man himself than ever before.

"The theme of the record is listening to your life," says Card, who recently completed an 11-city UK tour that took him from Dublin to London. "I think it's sort-of a natural by product of the theme that more personal stuff comes out. But I didn't sit down and say I was going to do this biographical record and tell people about myself. What I'm trying to do is present the idea that your life is a poem that God writes. Ephesians 2 says we are God's masterpieces, his poiema, his poems. Someplace else it says we are living letters. God sort-of writes our lives. Our lives are God communicating to us. Not in the same sense as his Word, but even as he speaks to us through his Word, even as he speaks to us through the silence of prayer, he also speaks to us through our lives. And so our lives are meant to be listened to."

But although 'Poiema' is an album carved from Card's life, it doesn't take long for Michael Card the scripture scholar to enter the conversation. He says that, if you look closely, the nature and life of almost every New and Old Testament character is parabolic. He explains: "Abraham offers Isaac and it's a parable. Hosea marries Gomer and it's a parable, even though it's true and something that really happened. So in presenting that theme I naturally talk more about my life. But I was a person who was raised not to talk about myself. So it was a stretch, it was hard for me to do. I didn't want to do it."

Still, he's pleased with 'Poiema'. "I'm very happy with it," says Card, who's become a standard for other artists to emulate, selling more than 1.3 million records and accumulating Dove Awards for Praise & Worship Album of the Year, Songwriter of the Year, and Song of the Year. "It's my favourite album so far. I just hope the theme is presented clearly enough in it that people will get excited that God is speaking to them through their lives. We learn how to listen to our lives from the Bible, especially from the life of Jesus, whose life in many ways was a parable."

Card's listening to both his life and the Word of God has been paying off for him for some years now. As a musician and composer he has consistently given CCM listeners enjoyable, exquisitely produced albums that inspire, entertain and instruct. Card has produced 14 critically acclaimed albums, written four books, and garnered numerous awards. In conjunction with his 10 years of ministry, last year Sparrow released 'Joy in the Journey: 10 Years of Greatest Hits'. The collection includes 18 (count 'em, 18) songs, including re-recordings of "Come To The Table", "Why" and "El Shaddai", plus the addition of a new song, "Chorus Of Faith". The song is an inspiring, rousing, stand-up-and-sing anthem. But it hasn't been all that Card had hoped it would be.

"It was on the charts for a while but [these days] a song is on the charts for a week or two usually and then it disappears when the next hot thing comes up," says Card, who has penned such CCM classics as "El Shaddai", "Jubilee", "God's Own Fool", "So Many Books" and "I Have Decided". "It used to be - like in the Bill Gaither days - a song would get on the charts and it would be embraced. It would be on the charts for a long time, it would filter its way into the church community and be sung in church. That doesn't happen anymore. So what happened with Christian music is that it has become very disposable, like pop music. But that's never been the tradition within Christian music. We've never thrown good music away."

Another musical tradition that Card has embraced is British roots music. His new album has a definite Celtic feel and spirit, including his intricate guitar work on his recently acquired Irish-made Lowden guitar. Belfast luthier George Lowden had approached Card after a concert during a previous UK tour and the two had become friends. He later presented Card with a guitar he had made with his own hands and prayed over each morning as it lay on his workbench. Card returned the favour on 'Poiema' with an instrumental composition aptly called "Lowden's Prayer."

But Card's interest in things Irish extend beyond his instrument and into his calling. "There's no other place besides the US where I've really toured but Ireland and the UK," says Card, whose most direct ancestors were Welsh and whose surname comes from Cardiff. "I feel called to be here. I think that's where the musical influence came from. I grew up on bluegrass music which is basically Irish music. So lo and behold I listen to Irish music and there are all those same banjo licks and fiddle licks. It's all in Irish music; that's where it all came from."

The response to the song during this recent tour has been good, he says. "It hasn't been as much as I hoped it would be, but we played it when we played in Belfast and people certainly sang along," he says. "We played it the other night in Birmingham and someone wanted us to play it again during the second half, so there's some response to it. It's really a song that was written more, though, for the people in the US to pray for Belfast. I'm hoping that the people in the US will be reminded to pray for Belfast because of this song."

Card's long-time producer, keyboardist and collaborator Phil Naish said they believe and hope they heard what was the final bomb being dropped in Northern Ireland during this last visit.

"The last bomb went off Sunday night in a place called Greencastle, which is about five miles from where we were," Card says. "We heard the explosion 12:30 at night. That would have been a great privilege to have been there to hear the last bomb go off."

There's yet another tradition that Card feels is important to his music, and that is the writings, beliefs and practices of the entire body of Christ, including those of the more orthodox branches of Christianity. That's a stance that has turned a few heads within the world of CCM.

"As a person who grew up in a completely Protestant setting, I was really divorced from all of the richness that is still there in Catholic tradition, primarily listening prayer, mysticism, and a deeper spirituality. Listening to your life could be a Catholic theme more so than a Protestant theme. In the last 10 years or so I've really been impacted by reading the church fathers.