Steve Camp: Feeding the sheep not entertaining the goats

Few rock gospel performers are as outspoken as American CCM stalwart STEVE CAMP. He was interviewed by Jan Willem Vink. 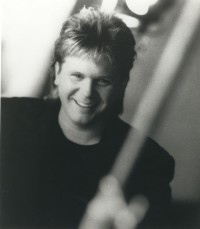 In a recent American interview rock gospel singer Steve Camp did what he's famous for, made a no-holds-barred attack on wrongs within the Church. In his songs and interviews he's attacked everything from false doctrine to materialistic Christians. Now Steve Camp has turned his attention to Christian music 'crossover' to pop success. "We'll do anything to get more exposure, won't we?" he asked a startled CCM journalist. "We'll even leave the name of Jesus out of the songs and not even call ourselves Christians in the interest of gaining just a little more media attention.

"That's a dangerous thing. You never see Paul saying to Rome, 'Listen, your things overlap with Christianity, let's find the common ground and I'll appeal to Rome on that basis.' Whatever the apology, you never see Paul acquiescing biblical truth for the sake of the Gospel. You see him being beaten, battered, homeless, called the scum of the earth. Jesus said to his own disciples, 'The world will hate you; you will be persecuted for my sake.' We have blurred that Iine today because we want to be acceptable to a generation. I think it's Tozer that said, 'We are spending too much time entertaining the goats and not feeding the sheep'."

Steve Camp was born and raised in Wheaton Illinois, growing up in a strong Christian home. His grandmother Mabel Johnson Camp wrote several hymns still in print today. Steve formed his first band while in the sixth grade and in high school was a member of The Campus Life Singers. He contributed to Petra's 'Come And Join Us' (1977) and Scott Wesley Brown's 'I'm Not Religious'. He signed himself to Word Records in 1977. With his friend Larry Norman he wrote several songs on his debut album 'Sayin' It With Love'. During his time with Word he recorded four albums before joining Sparrow Records in 1983. Steve became a major figure in the burgeoning contemporary Christian music scene. In 1987 during the height of the Ethiopian Famine, he formed C.A.U.S.E. (Christian Artists United To Save The Earth) which, with a multi-artist recording of "Do Something Now", raised more than half a million dollars through aid organisation Compassion International. More recently the rock singer formed, with preacher Tony Campolo, the organisation A.C.C.T. (AIDS Crisis and Christians Today).

Called by his supporters "a prophet for our time" and by his detractors "a hectoring, evangelical rabble rouser", Steve Camp is among the most studied of rock gospel performers, frequently quoting Bible expositors and theologians in his songs and interviews. Although living inauspiciously with his wife Kim and two children in Nashville, he still tours, doing 110 concerts a year mostly in the USA but some in Canada, Europe and Australia. Steve is under the authority of a local church and his latest album 'Consider The Cost' is dedicated to his pastor Dr John MacArthur, whom he eulogises as "the greatest expository preacher alive in the world today, bar none - the Charles Spurgeon of our day". He spoke to Jan Willem Vink about his music and theology.

Steve: I know it was a bit controversial, especially the songs about AIDS and so on. I didn't set out to be controversial with the record. The book of Micah is really what I based the theme of 'Justice' on. I know it's a familiar verse, but Micah 6:8 says, "What does the Lord require of you but to do justice, to love mercy and to walk humbly with your God." That really sums up a lot of the practicality of being a Christian. So reading that and hearing Tony Campolo speak on the theme of justice I felt: "Boy, justice is doing what's right." Isaiah 30 verse nine says, "This is a rebellious people, false sons, sons who refuse to listen to the instructions of the Lord." That's kind of our culture today, people refusing to listen to the truth, although they have it. Verse 10 says this: "Who say to the seers you must not see visions and to the prophets you must not prophesy to us what is right but speak to us pleasant words, prophesy illusions." People are taken with illusions today rather than what is right; what makes them feel good rather than what is true. So 'Justice' wrote itself very easily. I looked at the AIDS issue and hunger. I only had to look in the mirror to see a sleeping Christian at the time. I had to write about my own depravity; I was thinking about others as well but l really only had to write about myself and to ask 'Have I done justice? Have I shown mercy? Have I walked humbly with my Cod? Have I helped people with AIDS? Am I the one playing marbles with diamonds?

Jan Willem: How did Sparrow respond to the album?

Steve: When I delivered my record to the company, their first response was "Why did you make such a negative album?" I looked at it as being honest. 'Justice' was a turning point for me. It took a while to sell, but it sold very well in the States. I think the title cut I took the most criticism about. There was the verse on President Reagan. I voted for him, but again a man's politics is one thing but a believer's politics should reflect, I believe, the values of his faith. When someone claims to know Jesus Christ as his Lord and Saviour and yet gets his daily direction from the stars, then you have to question whether that man is sincerely a Christian.

Jan Willem: You write a lot with Rob Frazier?

Steve: Yes, Rob is a good buddy of mine, he's a pastor's kid and I'm not, so it gives a good balance. When we first met we hit it off immediately. We started to write songs and it seemed like we were a good complement for each other. We've written for each other's records and for other artists. Rob has had a good year, his album 'Heartland' has done well in the States. I thank the Lord for Rob.

Jan Willem: Are you still involved in AIDS Crises and Christians Today?

Steve: Very much so. Tony Campolo and I are in the middle of handing it over to another group of Christians based outside Philadelphia who have a full-time AIDS ministry there. The reason why is that it was growing rapidly and I could not administer it myself. It was hard to travel full-time and still keep up-to-date with it, so they have offered to take it over and we're working out the details now, but we're very much still spokespeople for the AIDS issue. Really the organisation was simply established to encourage the local church. We want pastors in the local church to take the lead in the emotional and spiritual and daily care of people with AIDS. The government and other people are looking for support medically; we think the Church should lead the way spiritually. And in issues of love and compassion and hope, not only to people with AIDS but also to their families.

Jan Willem: Are you involved yourself in visiting AIDS patients?

Steve: I visit AIDS patients in many cities that I go to. We have established a hospice in a house in Nashville. I do visit some. In the States we have AIDS patients that come to concerts. They come out and I always give a 10 minute segment or so on the AIDS issue.

Steve, I feel like I know you personally, even tho I don't. I wore out Justice and Doing My best on cassettes , and Justice on CD. I share your tunes when ever I can . My wife and I saw you at play At Edmon Chapel, in the summer of 92-93ish Kinda slept since then Old guy stuff...lol. But God as my witness I sure thought I ran into you at Nashville International Service dept sept 2012 when I was picking up my truck there from repair.. Maybe it wasn't you. but The guy looked just like ya. well enough of that, is there a calendar of where you play I would sure Love to enjoy your style of music again I do from time to time hit the section where we can hear short cuts from the albums/cd's now. well anyway ,I thank God for your boldness for the truth and during my backslide days (christian in exile) Your music and the late Keith Green and the Newer rocky Petra stuff Steve Taft and Micheal English really took me through the ride of my life. Well Wither I see ya again in concert or Not Your a God send to Our failing world . No false piety here I get into trouble for being Blunt. I am just fired up that I could write a letter of encouragement to someone I respect. thanks again Al Carlo