Ending Child Poverty In The UK 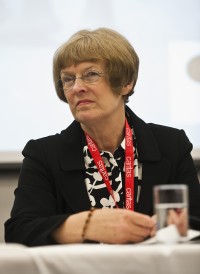 More than one in four in children are living (after housing costs) in poverty in the UK (3.5 million) and, under current government policies, the Institute for Fiscal Studies expects
child poverty to rise, forecasting 600,000 more children living in poverty by 2015/16.

CSAN (Caritas Social Action Network), the social action arm of the Catholic Church has welcomed the commitment by the Government to end child poverty by 2020 and measures included in the Draft Child Poverty Strategy 2014-17 consultation, such as extending free school meals to all infants and investing in Breakfast Clubs. However, CSAN has concerns about the over emphasis on employment. Employment on its own is not a solution to in-work poverty, which is an ever growing reality for households in the UK and reform to the labour market is needed to tackle the causes of in-work poverty. Tina Antwi spoke with Helen O'Brien, the Chief Executive of CSAN to find out more.

Tina: Your main concern about the child poverty strategy is its emphasis on employment alone. Why do you think this is a major problem?

Helen: It's evidence that work is now not the only solution out of poverty and it's not a firm solution. We know that two-thirds of the children who are in poverty are actually in working households, so even though a parent is working, they're still not secure from being in poverty; the wage structure is not enough and the general structure of the job market is just not helping these parents to get their families out of poverty.

Tina: But don't you think that work has a significant effect? Doesn't it help to an extent?

Helen: When people are in, for example, jobs that are only part-time or are very low-pay, or on certain types of contract that don't give you secure employment, it's very difficult to manage on the actual amounts that are received. Sometimes it's very difficult to work around the sort of planning that's needed if you don't know how many hours you're going to be working, if you're on a zero-hour contract for example. In terms of the benefits that are needed to support these people, I think that's what's been found, that the burden on the government is huge and it just doesn't seem a very sensible or satisfactory way of organising things: that, even if people are working - and working maybe one or two jobs and very difficult hours - that they're not supporting their family.

Tina: According to your response, you also feel that this strategy did not go far enough to reverse the decline on living standards facing many households. What do you think still needs to be done to address this?

Helen: We're obviously very happy that the Government's trying to support, for example, free school meals and various issues within the schools for children. I think one of the problems is that you're only in school for half the year, so the problem for parents trying to feed their families through inadequate incomes, as we've been discussing, isn't solved by that. I think one of the other issues is that the poorer families spend a much greater proportion of their income on basics and on food. The inflation on food prices has been far greater than the general inflation and considerably more than wage increases. The gaps between what it costs to keep a family fed and warm and what they can earn or get in in income is bad for a lot of people and it's particularly bad for those who are in the poorer families to start off with.

Tina: What role do you think the Church has to play in child poverty?

Helen: I think that the Church is obviously very concerned and I think that there's an awful lot of work that's going on. For example, many of our parishes in the Catholic Church - and I know the same is in other churches - are working with Foodbanks and offering emergency support to people who literally run out of food. I think many of our charities in the network - our church charities and the Caritas Social Action Network - are trying to support people with skills training and learning how to use computers and trying to help them with the various skills in order to get a job and to navigate their way through society. There's a lot of work going on, but I think that some of the things that we would look for support from the Government on is more structural things. Looking at the job market, the Church has said, and CSAN says, that we're hoping that more people can be paying the living wage and I think that's something that the Government can support more, because if you do earn enough then that has all sorts of roll-on positive effects for the individuals and then for society.

Tina: Save the Children, according to their report, show that British youngsters living in poverty could reach up to five million by 2020. Do you think Government has shown an urgency to tackle this issue and help resolve it?

Helen: I think it is an urgent issue and I think that the Save the Children report is very interesting and it really rings more alarm bells, as we've been ringing in our response to the child poverty strategy, because it is something that is going the wrong way at the moment. We are not going to hit the targets of the Child Poverty Act and I think that's been recognised. So if we're not going to, then we would call on the Government to take some very firm measures that will enable us at least to set a path whereby we will eradicate child poverty in these levels. It doesn't seem at all appropriate that, in a rich country like this, that we've got real poverty where children are cold and are hungry and aren't being able to get the benefits of a proper education because of those factors. So I think it is urgent. It's a bit hidden because we are a wealthy country in general, and certainly in relative terms to a lot of the rest of the world, but it's a very real and urgent problem for too many of our families.