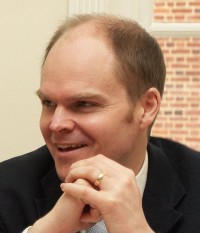 The Human Trafficking and Exploitation Bill is Northern Ireland's equivalent to the Modern Slavery Bill, but it goes considerably further in providing statutory victim care, statutory child trafficking guardians and in addressing demand for paid sex.

In voting for these provisions Northern Ireland now leads the way in having the very best anti-trafficking and exploitation legislation in the UK, so Tina Antwi caught up with Dan Boucher, Director of Parliamentary Affairs for CARE to find out more.

Tina: Why is it important that this bill was passed?

Dan: This piece of legislation is a Northern Ireland only piece of legislation, but I very much hope that it will have wider ramifications. What it seeks to do is to put in place more robust provisions for dealing with people who traffic other human beings - sending out the message that this is a particularly unacceptable form of behaviour. The number of convictions for traffickers in Northern Ireland is low and we hope very much that tightening up the law will make it easier for the police to secure convictions and send out a clear message. It also makes clear provisions on the face of the bill to provide support services for victims of trafficking when they're rescued for the first 45 days after they have been determined to have been trafficked. That's very important, as it's the first part of the United Kingdom to make statutory provision in that kind of a way for victims of trafficking. Support services will cover things like accommodation, translation services and the like to help people who have been trafficked in the initial days after they've been rescued and to put their lives back together again, to try and build for themselves a better future and recover from the trauma of their experience.

It also crucially has the provisions to deal with the demand for trafficking. At the end of the day the sad reality is that the reason why people are trafficked into Northern Ireland, the reason why they're trafficked into England and Wales and Scotland is because there is a demand from consumers in these countries for the services of trafficked people. The single biggest driver for trafficking to Northern Ireland and the rest of the United Kingdom is the demand for paid sex - principally from men who want to buy sex from women. In order to meet that demand people are trafficked in to meet it.

Since 2009 there has been a law in the statutory book in Northern Ireland and in England and Wales making it an offence for someone to pay for sex from someone who is, in the terminology, subject to force, which should cover someone who has been trafficked. However it's a very difficult defence to use because you have to prove that the person has been coerced in a very tight time frame. If you look at countries that have gone for much simpler offences, actually just making it illegal to buy sex from someone else, you'll find there that the law has been very much more effective with dealing with trafficking. So Northern Ireland took the very significant step of actually criminalising the purchase of sex and followed the example that's been set by countries like Sweden, that have criminalised the purchase of sex and they've ended up with an offense that's workable, that can secure convictions and send a very clear message to people that buying sex is not acceptable. Within the context of that it has sent a significant message to traffickers and indeed traffickers have been intercepted having conversations with each other saying, "Don't bother sending women to Sweden, there's no point. Their legal environment is so hostile to the purchase of sex that there would be no point in you sending women into that particular country".

So those are the three really significant things that the bill does and certainly in relation to two of them, namely the provision of statutory support services and the criminalising of paid sex, Northern Ireland now has laws that actually outstrip those of the rest of the United Kingdom.

Tina: Do you think the bill that has been passed is the solution to the whole issue, or do you think more needs to be done outside legislation?

Dan: I think that generally speaking the law is only ever part of the answer. What one needs to have is a culture change within society to engage with challenges. That's certainly true in this particular context. The law can play an important role in challenging a culture and changing a culture. This happened with the seats belts laws, as when they were introduced back in the late seventies they had a very significant impact on people. People didn't tend to wear them and didn't think it was necessary, but now public attitudes are very different towards that. I think that this piece of legislation is going to really help shape public attitudes and make people more aware of the issue of trafficking, so that people are more observant to see what is going on around them. It is obviously a direct challenge to people in terms of their consumer behaviour and clearly in the provision of services for the victims of trafficking - that's something that is not just the responsibility of government, but there's a role there for charities and NGOs to play in meeting that particular need and they do so already and will continue to do so.

All these things help to raise the profile and the priority of this issue, making people aware that sadly modern day slavery has not come to an end. It didn't come to an end with William Wilberforce's act, it's ongoing and there are more slaves in the world sadly than there were back when the first slavery act was passed back in 1807. We need to put in place the legislative framework that is really robust and leads the way in the world in order to tackle trafficking, by putting in place those three things that the Northern Ireland bill does, namely putting in place more effective mechanisms for catching traffickers, for providing better provisions and support services for the victims of trafficking when they're rescued and finally for putting in place a mechanism for dealing with demand in Northern Ireland, the demand in the rest of the United Kingdom, which actually drives trafficking and causes a demand for services which results in people being trafficked into our country. I think with those three provisions in place, Northern Ireland is going to be in a much better place than it was prior to this act and we very much hope other parts of the United Kingdom will be inspired by what has happened in Northern Ireland and draw on its experience.

Dan: England and Wales has a Modern Slavery Bill and Scotland is going to introduce one, but Northern Ireland led the way with the Human Trafficking and Exploitation Bill, which was first published in its initial format back in 2012 before any other part of the UK had a piece of legislation in play. It does go beyond what has been discussed in other parts of the UK. We hope very much that it will provoke and inspire. Interestingly, in relationship to challenging demand for paid sex, just this week it was put down to the Modern Slavery Bill by Fiona McTaggart, who's a Labour member of Parliament and co-signed by 31 other members of Parliament from a number of different parties calling for the same thing to happen in England and in Wales. That didn't actually get pressed to a vote in the end, but I think they were inspired to do that by what happened in Northern Ireland. We hope very much that this is an issue which will be returned to because our view certainly is that until such a time as you address head on the demand for paid sex in this country, which has gone up significantly in recent years and is unquestionably therefore driving trafficking into this country, until we actually grasp that, our view is that we're not really going to be able to properly address and engage with trafficking.

One particular thing where Northern Ireland has led the way, which is of interest to the rest of the United Kingdom, is the provision of child trafficking guardians. One of the very sad things is when trafficked children are rescued, a very significant proportion of them are actually lost and re-trafficked - about a third of them get re-trafficked. Part of the reason for that is when a child is rescued, they are passed from state agency to state agency with the police, law courts or education or local government - they get passed around and they have to tell their story to multiple different agents of the state and it can be a bit of a maze and fairly demoralising. In that process they can become very vulnerable to being re-trafficked and are re-trafficked. What Northern Ireland has done is made provision on the face of their legislation for the provision of something called the child trafficking guardian, which is a person whose role it will be to accompany a trafficked child if he or she has to negotiate their way round all the different state agencies. They have a guardian to engage with as a common point of reference as they make that journey and someone who is able to speak on their behalf if they are fed up of having to recount the traumas of their story. They're also specially trained to make sure that the best needs of the child are met and secured by the various state agencies. At the moment some charities try and perform that role, but because it's not a role that's recognised in law, it doesn't always have good effect. Northern Ireland has led the way in becoming the first country within the United Kingdom to make statutory provision for this. Again we very much hope that the rest of the United Kingdom and the rest of these countries beyond the United Kingdom will embrace the model they have set.