Local leader and minister, Will Porter, who runs the Beacon House of Prayer has written a book all about the end times and the question are we living in the end times.

A Christian would say actually there is trouble on the horizon, but God is not going to let the world go to pot. He's not going to let everything fall apart. So don't worry that the world is going to end because he's going to intervene before it gets to that point. Jesus' return is all about God coming to bring about a perfect world.

Jon: Let's look at some of the things that are difficult to explain but people perhaps have heard of. A lot of them come up in the book of Revelation or are connected to that. Some of the things like rapture; everybody has heard that word and thought that's a strange Christian belief. What does it mean and is it real? Another one in that same sort of context is tribulation. Again, it's a word that Christians are familiar with; it means great testing and great trial. But those two things often seem to be connected to the end times scenario. What do they mean and should we set great store by them?

Will: Jesus spoke about them very clearly. In one of his last sermons before the week of his death he spoke to his disciples about the future, preparing them and he said there was going to be great tribulation and distress. Not that that's the whole picture because there are good things, there's good news but you've got to be prepared ahead of time. He said there would be war, earthquakes, troubles and a rise of evil powers therefore that's called the tribulation.

For a period of a few years there's going to be this troubling time when maybe there are dictatorships, maybe global crises, everything is getting shaken in the world. But it is not the only narrative. At the same time there will be many people finding faith, many communities getting transformed, the church will rise up to its full potential.

The Christian story is there is light and there is darkness and it is all clashing at the same time. So whatever faith perspective you have, people are aware of the light that is going on and the goodness and people are aware of the darkness and the evil. In the middle of that clash Jesus says don't worry because I'm going to come and bring an end to all this trouble.

Jon: So there'll be that darkness, we're looking at Jesus coming to bring a conclusion to it but does that mean people are just going to have to suffer in it and are they going to be overwhelmed by it or is there a way that people can live, even though these dark, difficult times are going to come? Is there a way to be prepared for it? How should people get prepared so that they can go through it as hopefully and positively as possible?

Will: They should be because the strongest Christian word is hope. The bible says these things remain, it's said at every Christian wedding, faith, hope and love. And hope is all about the end times, eschatology; it's about the future. And hope is really not about what we can do, it's how God can help us and what God is about to do. For people who are looking to the future, if you want to navigate your way through the coming years, you've got to find a reason to hope. You may be a person who is very positive or negative. You can find hope in your family, in your job but ultimate hope, we would say, is found in Jesus Christ.

It's putting your trust in God and finding a peace with God that then changes your heart so you're not just looking at the news and the things in the world; you're also looking at what God is doing. There are so many positive things happening around the world particularly what God is doing, so many good news stories of communities being changed, of orphanages being formed, of businesses being turned around. All these things breed optimism and hope for the future. We say get your life sorted with God and then you can find your part to play in this world because God's got a part for you to play.

Jon: It's a little bit like the parable that Jesus told of building your life on rock rather than on sand; that when the storms come, the difficult circumstances come, you're built on something solid and you're not going to be washed away.

Will: Yes and most people are genuinely looking for what is my reason for being alive on planet Earth these days. What have I got to do with my life? Why am I here? We Christians would say when you find peace with God, when you find the centre of your life transformed by the love of Jesus Christ, then your jigsaw pieces click into place and your dreams, your passions, your gifts, your opportunities all that seems to form with a real sense of purpose. You think this is why I'm here; I can make this difference while I'm alive and everything combines to make a picture for what God can use. 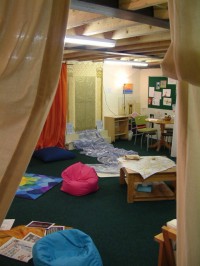 Jon: Do you think Jesus is big enough to be able to hold you if your world comes crumbling down, not necessarily because of your own doing but because of circumstances? Say there was a huge financial crash that affects all of your finances; say there is something that happens on a food level or on a health level. Is Jesus big enough that you can live through that?

Will: The story of Christian faith is that he has proved to be big enough. Many Christians would say exactly that, that when their own supplies run out, when the home is remortgaged or ill health happened, they found Jesus to be like a rock and there was supply and health and resource for what they needed. Maybe not to live like a king, but enough and more than enough. Jesus said do not worry about tomorrow, just seek the kingdom and everything you need will be given to you at the right time.

Jon: It's about getting aligned with the right person.