Jonathan: Going on this pilgrimage, was that part of you actively seeking?

Sheridan: Yes, it was part of it. Part of it was to get some sort of physical relief from all the mental work I'd been doing, writing a book. The other part of it was having a friend that I can go on this journey with so we could learn some things. It turned out that we would be inspired to have conversations brought up by the things we were experiencing.

One example: in Northumberland there's castle called Dunstanburgh Castle. It's several hundred years old and there's not much of it left. Archaeologists have looked into why the castle is there as there was never a settlement or anything to defend. It was built by Thomas, the Earl of Lancaster and it turned out that the castle served only one purpose which was to show off Thomas's wealth to the region. He wanted to look good through this castle. It was the equivalent to having a jet today: look how big I am, how great, how wealthy, the status I have in this world! And seven centuries later his name is still alive because of this castle. What a legacy! But then when you walk up to the information board Thomas is remembered as "an arrogant and unpopular man." How's that for a legacy?

It got us thinking, you know what, we can build these things, we can leave all these things behind that we think are going to be our legacy, build buildings, do achievements, create things, write books, but if we're rat bags, what matters in the end? I think sometimes we've missed this. We celebrate the people of great achievements, don't we? They are the ones who get the obituaries written up in the newspaper; they are the ones we have TV and radio specials on, not the little people around the corner who have never really done anything to make the history books. But gosh, they have been people who have been salt and light, and people of goodness and graciousness and love and joy and peace.

Jonathan: You often hear of sports stars, people who are influential, great footballers, and then they reach 35 and can no longer play, who are they afterwards? That sense of losing their career. And of course your testimony, coming from Australia you were at the pinnacle of what could be done in Christian radio back then, very influential and you had to let that go. So you have had to work through some of those questions. What have you learnt about the weakness of valuing and idolising career? 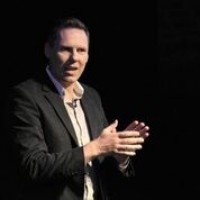 Sheridan: I think we are given gifts and talents, energy, blood flowing through our veins to move. So we are to go and pursue the things that God has given us to do. There might be some "success" in that; there might be something really quite profound that will touch a lot of people. That's wonderful, great. But in the end what matters most is not the things that I achieve, it's the person I become. So if I really become a rat bag, in the eyes of God, it's really all upside down. So yes, go and pursue the things that God has laid on your heart that have been tested and sifted, and confirmed by other people. I call them the persistent aspirations that follow you.

There's a great story about St. Cuthbert; in his heart he's a hermit. He just wants to be in solitude and pray all day. But he gets dragged out to become Bishop of Lindisfarne; this was back in the seventh century. He was already considered to be a miracle worker; God did amazing things through him. He would go to the regions nobody else would go to; he'd go into the warring tribes and give them the good news of who Jesus is. People would change and amazing things would happen. He was revered. Bede, the great historian of England, tells the story that plague ravaged the region and Cuthbert and one of his friends went out into the villages to see who was left and to comfort those people who were left and to pray for them and preach to them. They were about to leave one village and Cuthbert said to his friend have we missed anybody? Is there anyone else we can pray for? They look around and his friend goes off and eventually finds one person, a woman, standing in the distance. She doesn't want to come close to the great Cuthbert. She's holding a child who is near death; she has already lost two sons to the plague. Cuthbert goes up to her, takes the baby in his arms, kisses his forehead, blesses him, prays for him and prophesies that he is going to be well. And I thought that is what touches the heart of God, more than anything else that Cuthbert did; that's what's remembered in the heart of God.

Jonathan: Talk a bit more about what you've learnt about your identity. You're probably not like me but there are times when I wrestle and I'm weary of keeping going, what's the point, what's the value, I'm no good at this, I can't make anything happen....

Sheridan: I have those days too!

Jonathan: You get to that point at the end of yourself. What is it for you that helps you at that moment so you don't end up in a pit of despair? How do you pull yourself out of that place and know a value of yourself more than the accusations and the words that come at you?

What I have learnt, and I thought that I knew it but I had to rediscover it, and discover how deep it was in my own heart and soul, was that beyond the career, beyond being a writer, a speaker, and broadcaster, all of which could go tomorrow, I'm much bigger at this very moment than those things. That is one very small aspect of who I am. Right now I'm husband to Merryn, a son to Tony and Vivian, a brother to Tristan and a friend to Jonathan and DJ and a whole bunch of other people. I have a whole bunch of roles outside. Why don't I value friendship, for instance, as highly as I value being a writer, a speaker and a broadcaster? Why have we diminished friendship so much? Personality types and particular interests: why do I really like soul and funk music? Why is that? It's part of my personality, part of who I am. Why do I always sing the bass line of a song rather than the melody? I just do.

At this very moment, as we're speaking, I'm much bigger than just the author of a brand new book called The Making of Us. But beyond all that, ultimately a car crash can take all that away, beyond all that is an identity that is as unique to each one of us as it is common to those of us who call ourselves followers of Jesus. I am a child of God. I'd preached on this, written articles about it but when you lose those identities you realise how deep it's gone. Success, failure, death, nothing can take that away from me. In the end, when I have a bad day, nobody has returned the phone calls, the success isn't coming, when it feels like I'm doing all this and nothing is working, in the end I can sit on my couch and go you know what? I'm still a child of God.