Jonathan: There's a quote in your press release, which I loved: "When identity is lost, we can discover who we really are. The adversity we despise can release our greatest gifts into the world. And all the details of our lives from the first wiggle of our hands to the difficult events that brought us to this point can prove to be more significant than we've realised. Beautiful things can emerge from life not going as planned. It can even be the making of us." Expand on that a bit more.

Sheridan: That really has encapsulated what this book has helped me to discover. There are two journeys; one is the pilgrimage that The Making of Us is based on. Then the journey of writing the book, which was about four years of reflection, two years of writing. It was a difficult book to write. That itself was a journey and that has encapsulated the big discoveries. We've touched on who you can become, the identity, you can discover a deeper sense of who you really are when things go wrong.

That aspect of the 'adversity we despise releasing our greatest gifts into the world' this has been a big discovery for me. The apostle Paul says various things about love in 1 Corinthians 13. Famous things about when I'm weak then I'm strong. Probably something nobody has thought too much about is another little verse where he's talking about the trials and the troubles that he faces for being this apostle, this missionary. He says this fabulous, interesting little sentence 'Death was at work in us, but life was at work in you.' You think about that and it captured my heart quite a bit because he says when bad things were happening to me, facing all these trials, people chasing me out of towns and trying to murder me, it felt like death was at work in my life. But as much as that happened, life was flowing to you.

It seems to be that when we go through a difficult time, when we lose something, because invariably we lose something with any trial, when we lose an identity, when there's a gap in our lives - in our case a child - or the loss of a partner, or maybe you never got married in the first place, losing a dream, losing a career that opens up a gap. Left to itself that would just be empty and yet that's a gap through which God can choose to turn into a channel of blessing to others. There seems to be a corresponding dynamic that if you go through difficult times it can be the most powerful time that you can use to bless others. That's a profound thing. That's what Merryn and I have seen with our story. I've suddenly been pushed into this new place of helping people start again after their broken dreams, finding hope. I never planned that.

Jonathan: So the blessing for others is because in that place, you've worked through to find your value as a son of God that speaks greater and deeper than the circumstances that you have encountered, and in that you have a hope, despite the circumstances. Is that what you're saying? We all go through these things so we can all relate to one another when we hit hard times. So we're looking for the answers to these hard times, aren't we?

Sheridan: That's what I say to people who are going though difficult things when they come to me after reading one of the books that I've written. I want to grab them by the shoulders and say don't miss this opportunity! I don't want to belittle it, but this could be the making of you. This could be the very thing that if you keep on walking with God through this difficult time, this wilderness if you want, you could capture such great wisdom and such great empathy for others that you otherwise couldn't have. In fact it could be turned into something so beautiful, a kind of beauty that can only come through this kind of brokenness.

But in addition to that I would say that God may choose to use us in a place of weakness in a way that we otherwise couldn't, whether it be speaking into other people's lives, or praying for them. It seems to be an opportunity for a different level of - in church circles we would sometimes use the word 'anointing.' It's a terrible word because no one else in the world knows what it means but it really just means that somehow God gives you a little bit more blessing power for other people. It seems to be the case that there is a corresponding paradoxical experience when you're in that place where there's a big emptiness in your life, that can be the channel for his power to flow through you to other people. You can find yourself saying things you otherwise never would have said. That's when I found myself saying 'Where did you get that from?'

Jonathan: Finally, on this topic, as you come through and find that fresh perspective with God, do you find then that you're less vulnerable to those kinds of circumstances to the level to which they may have affected you? You've learnt something so you're able to stand in that place next time something similar comes along? 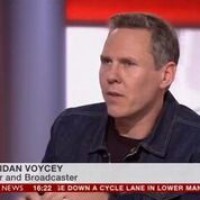 Sheridan: That's a very good question. You're talking about resilience, the sense that since you've faced it, you're able to face it next time with a little bit more strength. I think there is something to that. Of course, the caveat to everything that we're talking about is that you can actually ignore all of this. You can be the proverbial ostrich and stick your head in the sand; you can run away. I've got a whole chapter in The Making of Us called the In Between Time, that's the time where all the beauty is gone. We go through this particular patch in the pilgrimage, where all the beauty of the North is gone, all the amazing castles, amazing sunsets and it's just rugged industrial territory. It mirrors what we can often go through in a certain period of our life; all the beauty is gone and you're not sure if it is ever going to return. And during that in between time there is great temptation to take short cuts, to go and run, to go back to where you've been to because that's where all the beauty was. Actually, we're called to walk through that in between time. Then we will have resilience to face it next time it comes round.

Jonathan: Absolutely, because I think if you don't go through it, you remain at that place. It reminds me of another scripture; Jesus said that the devil wants to steal, kill and destroy. I don't think that's just taking things away practically speaking, but also your soul, your hope. But Jesus said I've come to give you life and life to the full and I guess as you find something of him, and you find God's heart for you then you overcome, you're moving forward so you're coming into more life. And if we keep going in this journey we will come into more and more life.

Sheridan: I bet if I were to ask you who are the people that have really touched your life when you are in their presence, I bet they are probably scarred people. They've been through some battles and yet they've been able to walk through. They've somehow been able to walk on with God and recycle it. It might be that they are still there and they've got a softness about them generally, that's what happens, the hard edge or the confidence that was misplaced confidence tends to ease away.

Jonathan: Things that used to be important aren't really as important now and the way you are with people, you're much more patient and forgiving and gracious because you've learnt the hard way.

Sheridan: Absolutely. There's a humility that comes and God loves a humble person and gives them greater power.

Jonathan: I want to ask you a couple more things before we finish. What was the most memorable moment of your pilgrimage?