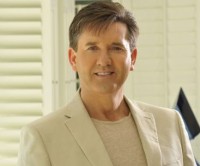 When in 2011 Cross Rhythms last interviewed Irish country-tinged crooner Daniel O'Donnell he was already a recording megastar. Since then the 56 year old has continued to clock up the hit albums and tour tirelessly. About to embark on a UK tour and with a new album due for release he dropped into the Cross Rhythms studio where he was interviewed by broadcaster Chris Mountford.

Chris: You'll be playing a concert in Stoke-on-Trent in October, won't you?

Daniel: Yeah, we're touring now here in Stoke, and we'll be here in October at the Victoria Hall. It's a tour we will start in Liverpool on 1st October and then we finish up in Glasgow on the 14th, and we'll be in a bus near here in Leicester and the De Montfort Hall as well. We tour every year. We were in Birmingham earlier in the year; we're in striking distance to Stoke regularly but I think it's two years since we were here in Stoke. It's always nice to get around Stoke as I've been coming to do concerts here for over 30 years. It's amazing to be able to say that.

Chris: In terms of the touring over all of those years, how do you keep it fresh each time?

Daniel: I suppose some people say, "You've been singing that song for 30 years," but I never feel like 'Oh my God, I've got to sing that again'. I love the opportunity, I love what I do, I always have loved the singing and I enjoy every time I do a show. It's never like 'Oh not this again'. I think if it was I wouldn't do it.

Chris: Of course. Now you have a new album coming out. Tell me a bit about it.

Daniel: The album is called 'Walking In The Moonlight'. It'll be out the end of November. It's a mixture of songs and the title track is going to be a single as well. It's written by an Irish man not far from my home called Pat Maclean. It's kind of a calypso kind of beat, but I love it, and the audience do too. I've done it a few times in the shows recently and the audience really like it, so hopefully it'll be well received everywhere. The album, as I said, is a mixture of some original songs and some older songs and people enjoy that too.

Chris: Tell me about some of your favourites from the album.

Daniel: I love the title track. When you get original songs I would know immediately if I'm going to sing them. Even if I don't sing them, it doesn't mean they're not good songs, I just feel they're not for me. Pat Boone recorded "Remember You're Mine" many years ago so people who were around in the '50s and '60s will remember it. A couple of songs were written by a man called P J Morahee. He wrote one called "I'm Grateful" and he wrote it for me actually. Just for the fact that I sing and what I get to do and how grateful I am to be doing it. And it's lovely, it's nice when people write songs almost as if I've written them myself. I do write some songs but nothing on this album. So it's a mixture of that kind of thing, and I love them all. I'm very fortunate that I get to pick and record the songs I like and nobody dictates what I should do or what I shouldn't do. I have free reign. If they're not what people like then I'm the one to blame.

Chris: Over the years you've recorded songs around Christian faith. Is there anything like that on this new album?

Daniel: On this album there are no inspirational songs, but as you probably know I've done a number of albums; some very religious and some just inspirational, and I've done shows based on my faith too. There's a great market for that type of music and people sometimes dismiss it. There's a huge amount of people searching for something and they're trying to find it in music and it sort of leads them to maybe something else. But I'm very blessed that I get to sing that type of music and always in the show I include a couple of inspirational songs.

Chris: With the tours that you're doing soon, tell me a bit about what will be happening on tour.

Daniel: There'll be a mixture again. I always like to bring people from 'then 'til now' so there's a fair bit of reminiscing in the show. And also a few of the newer songs from the album that's coming out so people get a flavour of what's on it and, hopefully, a good night.

Chris: Where can people find out more about the tour?

Daniel: If they go on the website danielodonnell.org you'll see everything there. The local shows are Stoke, Leicester and Liverpool, but we're also in Hull, Cardiff, Cambridge, Portsmouth, Wimbledon, Dundee and Glasgow. First we're off to America; we're doing North Dakota the end of September. Then the tour here in England is October. We're in Branson, Missouri all through November and St Catherines, Ontario in early December. Then we're in Ireland in December at Belfast, Derry, Kilarni and Castle Bar, then finally we go to Australia in February/March. That's far enough to look forward to.

I love Daniel. See you in St.Catherines in early Dec. Can't wait

Love your music so much Daniel. Will be coming to no. In November the 22. Can't wait. I saw you in concert at soaring Eagle casino and fell in love with your music. One of the best singers of all time. Specially love the country songs you do.also Mary Duff is a beautiful singer. See you in November!