Daniel O'Donnell: The Irish superstar talks about his latest album and his faith

Daniel: I never record specifically from a Catholic point of view. I don't look at an album and think 'well that's Catholic'. I mean, "The Old Rugged Cross", "Amazing Grace", "Abide With Me" - I've recorded all these and they are songs that would be sung in both churches. I suppose there's some, certainly like the hymns to our Lady, that would be very Catholic but then lots of people have recorded "Ave Maria" who are protestant and "Ave Maria" would be considered Catholic.

Peter: Do you think the Roman Catholic Church and the Protestant Church are showing any signs of meeting in unity?

Daniel: Well I don't know. There will always be differences in religion you know, small differences in how we see things. We're all Christians and I think that being Christian is how you relate to one another. It's not necessarily what church you go to, it's how you relate to one another that shows your goodness or your holiness, if you want to put it that way. And there are people in both religions that I would say wouldn't be living the way that God would want them to live and there are people that maybe don't go to church that are very good people. I think as far as coming together as churches, I don't know if that will happen. That might not be a good thing anyway because people look for different things in churches and it's like anything, we need diversity and we need choice.

Peter: One of the things that particularly impresses Cross Rhythms is the amount of time you spend with your fans, especially after concerts posing for photos, signing autographs. Is that difficult, especially part way through a gruelling tour?

Daniel: I've never found it difficult. Certainly you get tired, physically tired sometimes, but I enjoy meeting people. I remember in Stoke one night, three ladies couldn't get a taxi and I stopped my car to get out and speak to them. I remember them well, unfortunately one of them died recently. People come to meet me before and after the shows so I have a lot of memories of people. If I never met anybody I would not have got to know the audience. I wouldn't have got to know the people that come to the shows. It works well for me and I enjoy it.

Peter: Does your face ache from so much smiling for the photos?

Daniel: (laughs) It's good to smile because it keeps you young. You get older if you frown. 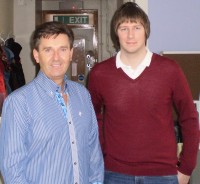 Peter: Returning to the Christmas theme, do you think Christmas, especially in our culture, is just an excuse for unbridled consumerism?

Daniel: There's certainly a great deal of consumerism in Christmas. There's no doubt about it. But the actual season of Christmas brings a lot of goodwill to people, it makes people happier and if you're happier you're nicer to other people. At some point most people will think of the real reason for Christmas and that's a good thing. It's so important that we celebrate the season of Christmas.

Peter: Getting back to 'O Holy Night', what do you remember about the recording sessions for the album?

Daniel: It's all myself with an orchestra and a choir. It was a thrill to record with such wonderful musicians and singers - it gives a great atmosphere to record. I'm very lucky to have the opportunity to work with all these talented people. When you start out you're doing everything on a very small budget and as you get more successful you can afford to spend more for recording.

Peter: In recent years you've started to write songs yourself. Is that something you're going to carry on doing?

Daniel: Well maybe occasionally, but I wouldn't consider myself a songwriter. I've done a few songs - I did one album completely with friends of mine. I love to cover older songs and I would never limit myself to singing my own stuff because I think it's nice to have familiarity and I think the audience enjoy what I do. They enjoy the nostalgic tone of the music; for some of them it's music they would have grown up with. Obviously the younger people may not have grown up with it but do enjoy it and hearing it on radio. I think the mix is good for me.

Daniel: Not very much. People say to me 'well, what would you like?' and I can't think of anything that I want. I'm very content with what I have so I don't look for anything. Having said that, a 5-series BMW would be fine but I don't think I'll get that. (laughs)

I love ALL of Daniel's music. He has the most amazing voice, personality, and ability to sing other's songs even better than the original singer.
As for country-I was born and raised in Kentucky- from Irish descent-and I'm about as 'country' as one can get-and I think Irish music, in general and in nature-is also about as country as one can get. So, Yes, Yes-he is country. Wearing a cowboy hat and chewing doesn't make anyone country-neither does a FAKE accent. Thanks for the amazing music by Daniel O'Donnell-ALL of it! (I can't get enough of listening to him sing)

This is a very-well-written article. I met Daniel after a show, in May 2011, in Wilkes Barre, PA and it was just like greeting a long-time friend. His talent is unmatched, as far as I'm concerned, and his on-stage energy, boundless. You can tell he really cares about his fans, and is a genuine man of God. Thank you very much!