As the touring version of BILL & GLORIA GAITHER'S HOMECOMING FRIENDS rolled into Glasgow, Lins Honeyman went along to a special pre-concert press conference. 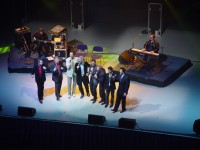 On stage at Clyde Auditorium, Glasgow

Spanning 45 years, the marriage of Southern gospel luminaries Bill and Gloria Gaither has been a fruitful one. Together they have released hundreds of recordings, videos and DVDs, produced a dozen musicals and published numerous books. On the live circuit, more than 1.1 million tickets have been sold since the Homecoming Friends tours started in 1991 and their popularity shows no sign of decreasing. Vastly prolific, Bill and Gloria have written in excess of 700 songs and have shaped the gospel music landscape with classics such as "Because He Lives" and "He Touched Me" - the latter famously covered by Elvis Presley on his 1972 Grammy award winning album of the same name.

Throughout their careers, the Gaithers themselves have picked up a plethora of honours including Grammies and Dove Awards. Even before their induction into the Gospel Music Hall Of Fame and being the first artists to be awarded the prestigious ASCAP Songwriters Of The Century Award, their place in gospel music's history books had long been assured.

In addition, many fledgling artists have benefited from the Gaithers' vast experience with the likes of Steve Green, Russ Taff, Michael English and Sandi Patty all having risen up through the Gaither ranks to become CCM heavyweights in their own right. This tradition continues to this day with vocal group Ernie Haase And The Signature Sound, husband and wife team Jeff and Sheri Easter and singer/songwriter Janet Paschal appearing alongside the world famous and award winning Gaither Vocal Band during this current incarnation of the Homecoming Tour which incorporated appearances in Belfast and Glasgow at the start of March. 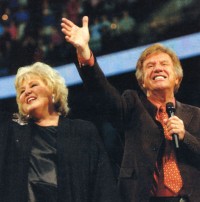 Bill Gaither, now in his 70s, explained the reason for this particular tour: "We did a taping in Ireland a few years ago and I always feel bad for the audience because, when we're doing a taping, we're going there to do a specific job and a lot of them are coming to listen to our old songs. It's like I'm a horse with blinders on and we have to do mostly new stuff for the video. This time, we just wanted to come over and do this and have some fun."

It seems that the range of DVD releases are a driving force in maintaining the Gaithers' status in the industry. "They all knew who we were in Belfast last night thanks to the videos," explained Gordon Mote, renowned session man and Homecoming keyboard player. "We want to keep the audience we've got and get new folks. We want to do this for a while!"

"It is interesting that our music got the ears of the people over here," Bill added. "If it had just been audio, I'm not so sure it would have got your interest but, because there are pictures with it, people tend to notice that these folks up there seem to like each other. We heard about a psychologist who suffered a nervous breakdown and had drawn away from Christ. She said that she wasn't normally into our type of music but once she watched us on video she was hooked. She also said that this is what the Church ought to be like - people who like each other. People ask if it's really as real as it seems to be. Well, yes it is. Also, the videos have got parents in touch with their kids. If I can bring families together, I'll go for that!" 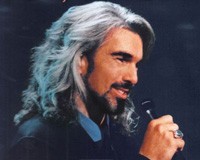 It is evident that the Gaithers' own particular brand of music has had a positive effect on many people's lives. Guy Penrod, lead singer with Gaither Vocal Band, considered the appeal of Southern gospel: "There is plenty [of] difficulty in this world. Our music is primarily in major keys and that in the most part brings a smile to people's faces. The draw to this type of music is that it isn't so introspective - it's music that tends to look out. There is music in the world today that is forlorn, grey and sad. I'm not saying our music is pie in the sky - we're very realistic about the condition of man - yet at the same time we have a very real Saviour and this music reflects that. That's a real positive for me."

Bill was quick to point out that Southern gospel might not be everyone's cup of tea: "I grew up in the north but our music is a southern phenomenon. In America, because of the civil war, there is a divisive nature between the north and the south. The person who said music is a universal language lied because music is divisive. Just you try to find a radio station that both grandchild and grandparent like! Music is also divisive in terms of American churches. Churches can be divided very quickly between a traditional service and a contemporary service. The point is that what is contemporary is very temporary when all is said and done."

With this in mind, it is perhaps surprising that the Homecoming shows continue to sell out beyond the Southern states of America with the recent Glasgow and Belfast dates being no exception. Bill's wife Gloria shed some light on this phenomenon: "Our music is rooted in an American form of country music called bluegrass and bluegrass chords originally came from bagpipe music in Scotland. American churches still reflect a lot of Scottish and Irish roots and there is a little kinship stylistically between America and your countries."

During the press conference, the Gaither Vocal Band treat their pre-show audience to an impromptu version of the vintage hymn "O Love That Will Not Let Me Go" with Guy singing the lead, Wes Hampton and Marshall Hall on tenor and baritone respectively and Bill taking the bass line. Amidst rapturous applause, Guy explained that the close knit harmonies are key to the group's success. "The harmonies are what you don't hear so much in modern music. They are coming back though and kids are listening with enthusiastic ears." 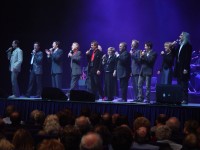 "I've always loved harmonies," added Marshall Hall. "I was attracted to the Gaither Vocal Band by their harmonies and through the Southern classics. It was some of the best stuff I'd ever heard. I stay because God has me here and I love sharing with Bill and Gloria, Guy, Wes and everybody on the tour. I feel that God has led me to this place."

Bill himself feels that God has drawn him into this line of ministry. "I never imagined I would be doing this. I listened to Southern gospel as I grew up. Then I met Gloria and we started writing some simple songs. I never thought of myself as much of a singer but when it came to these songs I thought - hey - these are good! It's hard to figure out why God takes something like this and blesses it. It's been an interesting journey and it's always amazing to meet brand new people knowing we already know the most important thing about each other. What can I say - I'm blessed."

Keyboard player Gordon Mote summed up the Southern gospel pioneer's work ethic. "Bill Gaither doesn't have to do this - he and Gloria have accomplished so much. His excitement keeps us excited and that's pretty contagious. We're on the same team. People at the concerts sense that. What can you not like about that?"

Hey Bill I have been wanting to become a relly good singer and i was wouldering how to do that stepby step and i also want to make my own group so if you can just let me know how to do that. That would be great Thank you God Bless your friend Caleb Norris

As a lover of Gaiher music it was my privilege to be at their concert on Sat 24th Oct 2009 in Glasgow.
Once again we were treated to over 3 hours of singing and testimony from the Homecoming Group.
Being at another live concert was a great experience as the Holy Spirit's presence was felt from beginning to end.
May God continue to use this group to bring joy to many people and bring honour to His Name

I have followed the Gaitherâs for many years now, and like most who follow them I have a large collection of their DVDâs. But there is nothing like seeing your favourite performers in real life. So I went to see them at Glasgow October 24th 2009. they where superb. Yet the experience was marred by what I would call Jackboot Jill and her associates. We where never told when buying the tickets that photographs where not permitted, it was only minutes before the performance that it came over the speakers, then only in the foyer not in the theatre itself. So those who went straight in to the theatre never heard the message. Now Jackboot Jill has a job to do, but for the people who paid Â£30 and more to see the Gaitherâs and wanted to take those pictures as mementoes of the occasion. Where set upon by Jackboot Jill and her associates with an uncompromising vengeance, which was pathetic when you realise those in the centre of the theatre that could not be reached where clicking away merely oblivious to the rule, while those surrounding the outer edges of the theatre and could easily be gotten at, where almost under attack, yet they where only using their mobile phones not professional equipment. I saw one man with a Canon camera being escorted of the premises buy one of Jackboot Jill associates. Yes he got thrown out for taking photos of his heroes. So I for one will never go to that place again.

Where can I buy videos in ireland

I am trying to find out when the Gaithers are in either Glasgow or London and just can't seem to get in to the system I need.

The Homecoming Group are in Glasgow on Sat 24th Oct.
If you go on to the Gaithers web site and click on tours that will give you the details. I know there are a few tickets left.

I always find peace and joy with the lord just listening their gospel music ,thank you and keep it up .

l am a gaithers fun, when l watch them in TV L really feel the power of the holy spirit in me l pray that Gods anointing continue bein in you. l would once like to come and be with you and share with you what he has also done to me as alm asinger, God has also talented me in that and l feel praising him Emen.

As a Gaithers Fan since the early 70's it was my delight for our Silver Wedding to get tickets for the Gaither Fest 2008 in Myrtle Beach.
We were able to meet some of the artistes and it was absolutely fantastic.
I have introduced many friends to the Gaither music and like me they think they are wonderful.